Happy to announce the publication of my paper about diagrammatical transformation in Semiotica!

Abstract: There exist visual signs that have stood their ground throughout the ages for the simple reason that they fit the bill. They are evident or evidently true representations. The bill they fit are life, sentience, and sapience. Which is saying that it comes down to instinctive recognition, i.e., unexplainable, but unmistakably evident. They are true because we feel they are true. This paper attempts to counter the adage that “the obvious can only be explained to those that already understand it” by visually transforming the ancient sign best known as the “yin-yang sign” or Taijitu. The goal is to demonstrate that diagrammatical transformations reveal knowledge inherently present in the visual. In other words, an attempt to reinstate the status of diagram that the Taijitu originally had instead of an image, a visual, an emblem … labels that point more to what it demonstrates than to what it is, i.e., an actionable tool. To do so C. S. Peirce’s triadic sign will be juxtaposed to the sign under analysis, and his work on Existential Graphs will be used to orchestrate transformations, thus tapping into the diagrammatic nature of the sign. Following which, the similarities with Henri Lefebvre’s trialectics will be shown in the resulting diagrammatic transformations.

A short review of what I took away from this year’s Semiofest: 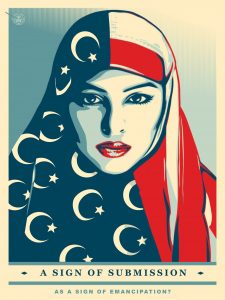 A long read analysis of the American flag hijab as the sign of the Women’s March 2017.